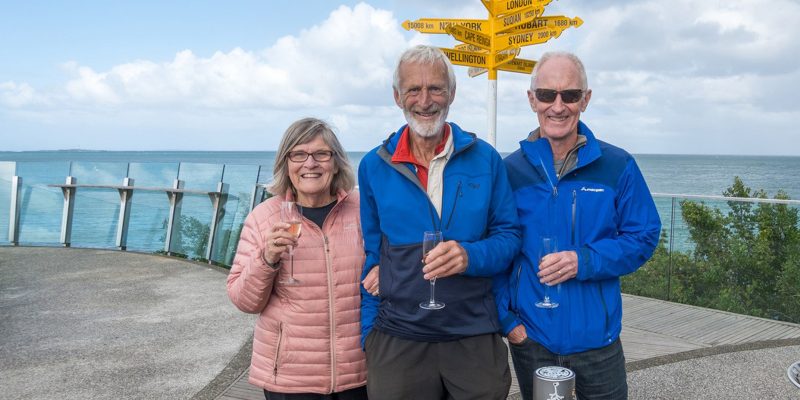 My husband Tim has finished his Te Araroa Trail, so I have asked him to summarise.

So, how does it feel to have arrived in Bluff?

What were the high and low points of the trail?

The high points were numerous – 90-mile beach; the Timber Trail in the Waikato; the spectacular country of the Raitihii and Lake Tekapo; the coastal walk of Mungawhai Heads.

What I would call the ‘forest fetish’ of the Trail – numerous forests of questionable value as walks –  for me, that was a low point, as I prefer Big Sky country.

I loved meeting so many like-minded people and hearing their stories.  My admiration for the 18-30-year-olds who did the trail with such enthusiasm for their country is sky high.  I also enjoyed the kindness of strangers.

What did you learn about yourself?

That I’m bloody-minded – so what’s new?  People ask what deep philosophical thoughts I had as I walked, but my mind was generally on the trail I was walking and the food I could eat that day!

What were the physical changes in you?

My feet will take a while to recover, mainly because it was wet underfoot, but my knees are stronger.  My body has benefitted, though I have lost 14 kilos.  I do have a residue of tiredness though, due to the sheer physicality of the day-to-day.

What would you do differently?

I made the mistake of thinking it was like an expedition, whereas this trail requires more an understanding of the mind – a tougher mentality.  It challenged me in a way I didn’t expect, due to the constant daily routine of the trail.

Evaluation of the trail itself?

Sometimes it seemed to do things just for the sake of doing them – there were strange loops which seem twee, for example, reaching Bluff and then walking over Bluff Hill in order to make the 3,000 k mark.

However, the prescribed nature of the trail led me to places I would not have gone, and therefore some interesting discoveries.

Overall, it is recognised as one of the harder long-distance trails in the world, so as a challenge that’s a good thing.

And now for the two questions people are asking me:

Will he put on a show-and-tell as he did after his South American bike trip, as a charity fundraiser?

I’ll be happy to if it is wanted

What is he planning for his next adventure?