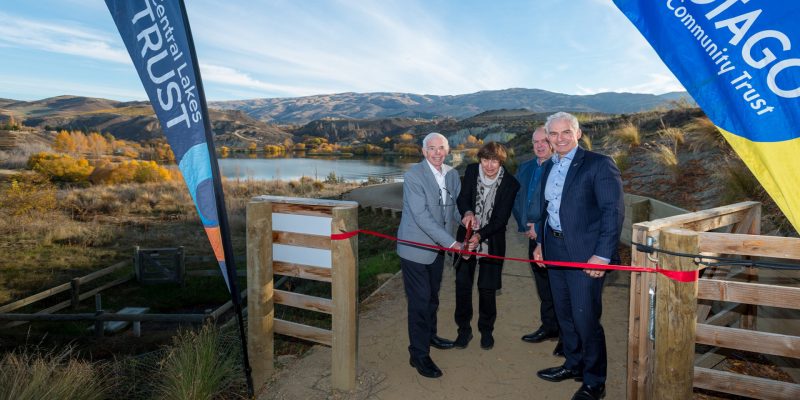 It was a big day for the Central Otago region last Friday, as the Minister of Tourism, Hon Stuart Nash, officially opened the trail, following a blessing.

The Lake Dunstan Trail extends and complements, the Great Rides of the Otago Central Rail Trail and the Roxburgh Gorge Trail.

COQTNT are simultaneously working on the link through to Queenstown, with a 3km trail along Felton Road due for completion at the end of May and the remaining Kawarau Gorge in consenting stages, and then through to Luggate.

“Today is a day to celebrate linkages between communities and pay tribute to the foresight of those who pushed to make this happen,” says Mr Nash, adding, “Cycle tourism has great potential to attract domestic and international visitors.”

Mr Nash praised the foresight of people like Sir Eion Edgar and many others in the development of what is not only a fantastic new infrastructural asset to draw visitors to the region, but a great recreational benefit for locals to enjoy.

Trust Chairman Stephen Jeffery, says, “The trail takes you through amazing scenery, which would otherwise be inaccessible, past some fascinating historic sites and onto wonderfully engineered structures.

Today is about celebrating our progress, enjoying the achievement and acknowledging
the vast contribution from all parties involved.”

Central Lakes Trust Chair, Linda Robertson says she is proud of the significant achievement to date, saying, “This is a huge initiative for our region.

It will create a world-class and accessible trail network traversing some of New Zealand’s most stunning landscapes.”

Linda says that when the five stages are complete, it will pass through almost 30 local communities, which will link our people together.

Otago Community Trust Chair, Diccon Sim spoke of the Trust’s delight in supporting this world class trail to fruition, adding, “The challenges and engineering solutions are plain for all to see – not least the bridges and cantilevered sections which have been blended into cliffs and sheer schist rock walls to complete the trail.”

While in the region, Mr Nash also announced that the government has given the go-ahead for its New Zealand Cycle Trails fund to include a 10.5km trail from Lake Hayes Estate to Gibbston.