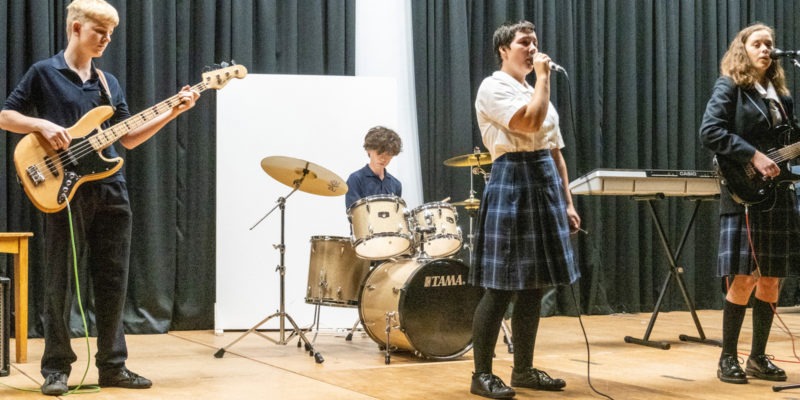 It was a case of ‘follow the music’ at the Cromwell College auditorium last week, as Cromwell College bands, Chaos ’n’ Control and Nevermind gave a free concert to their fellow students, as a rehearsal and taster for last Saturday’s Smokefree Rockquest 2021 in the Lake Wanaka Centre.

The lunchtime audience had no problem supporting original New Zealand music on this occasion, as they responded enthusiastically to the bands.

Founded by two music teachers in 1989, the Rockquest annual competition has become a popular nationwide event.

It aims to motivate young musicians to prove their ability and realise the heights they can reach in a music career, and to encourage their peers to support original New Zealand music.

It is Aotearoa’s only nationwide live, original music, youth event.

The band Nevermind is made up of Years 10-11 students, Cam Anderson. Hunter Gould, Vani Young and Bjork Swain.

“I love music and that chance to express myself. Being in a band is awesome, because it gives us the opportunity to play in a massive competition and learn how to work as a band.”

Arts Co-ordinator and Teacher of Senior Music, Cath Forsyth, expressed thanks to Peter Stevenson, guitar teacher, who mentors the bands, training them in band craft and working cohesively as a unit.

“Students benefit from hearing and seeing other groups perform. Bands entering Smokefree Rockquest must play originals, band members get exposed to different musical ideas that they can implement when composing later songs.

There is a great vibe at SFRQ and students become friends with like-minded students from other schools, after Sunday’s Smokefree Rockquest, Cath adds,

“They did a great job and both groups performed well but did not place for the competition this time.”