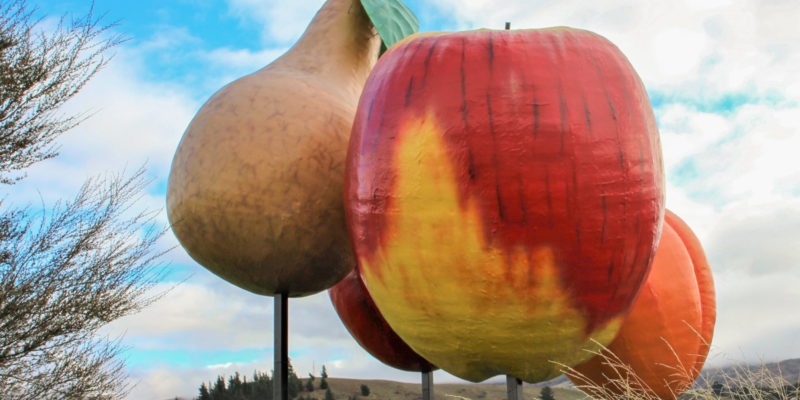 *This report was compiled as part of Connect Cromwell’s Public-Interest Journalism project.

A shortage of painters willing to take on large sculptures and lack of maintenance has resulted in a nearly $100,000 bill for the repainting of Cromwell’s iconic fruit sculpture.

Recommended annual cleaning and lacquering to guard from fading had not been budgeted for in the Central Otago District Council’s planned outgoings, the Cromwell Community Board were told last week.

This had resulted in faster than expected fading since the previous repaint five years ago, which cost $37,000.

The Board were informed at a meeting last week that prior to that work, done in 2016, the iconic fruit had not been painted for 12 years.  The council had budgeted $50,000 for a repaint next summer but found few contractors keen to do the work.

Councils in Gore and South Canterbury who have fish sculptures had experienced similar problems finding willing contractors. In Gore the famous trout was cleaned and lacquered biennially and rarely repainted.

A quote for $94,500 was eventually secured for the Big Fruit and the additional funding was approved by the board.  Nearly half the cost related to scaffolding and board members questioned whether mechanical elevated platforms would be a cheaper option. Board member Tony Buchanan voted against the approval due to cost.

Instigating future cleans and coatings to improve the longevity of the paint was favoured by all.

Developers of a four-stage subdivision off Cemetery Road had three of their four new road name suggestions rejected this week.  Dunn Road, named after a former Cromwell mayor, was accepted but the board considered Sexton, Pastor Way and Restin Place as unsuitable. Cr Cheryl Laws considered the latter two to be “pun names” and favoured others that had historical significance. The new roads will be named Brodrick Way and Turton Crescent after two former mayors and Hucklebridge Place after a couple with a long local government history.

Cyclists using the Cromwell Bike Park will be shielded from the weather in future after approval for a shelter over the starting ramps.  The shelter, being sponsored by James Dodd of Wide Span Sheds, would also make the venue more attractive to those looking to hold events.  The Central Otago District Council is also looking into providing a toilet for the facility, the meeting heard.

A new $7M roundabout at the intersection of SH8B and Barry Avenue will provide access to the Wooing Tree subdivision, which may contain more houses than originally consented.  Land from the Big Fruit Reserve, road frontage near The Gate Hotel and the subdivision itself will be requisitioned in September by Waka Kotahi New Zealand Transport Agency (NZTA). The single-lane roundabout is expected to be completed by the middle of next year.

The Wooing Tree subdivision, originally set for 210 sections may now contain 332 sections if an application under the government’s Covid Fast Track legislation is successful, CODC Planning Manager, David Campbell said in an earlier statement. While the change, being processed by the Environmental Protection Agency, will not be publicly notified, the CODC, some residents and businesses have been invited to comment by 30 June, according to an Agency document.

Meanwhile work will begin in spring on NZTA’s $8M roundabout just up the highway at the intersection of SH6 and 8B near Nichols Garden Centre.