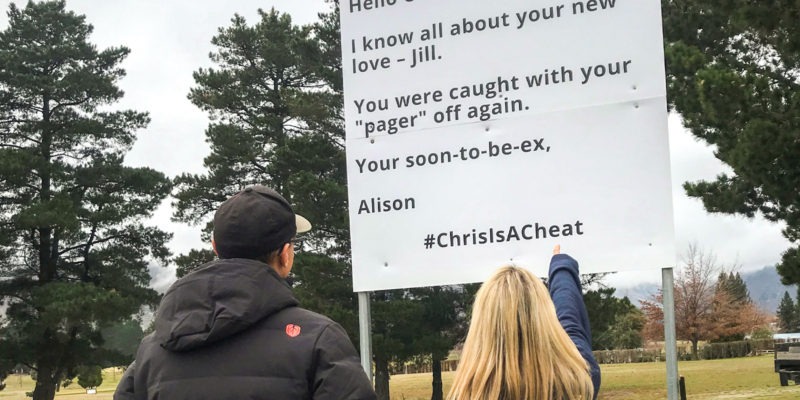 Who is Jill?  Who is Alison? What is the gossip on Chris the Cheat? And does he really have 5 wives?

This seems to be the topic of the day as new billboards appear on Barry Avenue.

It seems many locals are not familiar with hash tags, as the ‘#ChrisIsACheat’ in the bottom corner of the board should have been a clue.

If that means nothing to you, perhaps the jersey worn by one of my lovely photo models may prompt your thinking, especially if you can remember the early days of New Zealand’s popular television soap.

Tickets for Fine Thyme Theatre Company’s next production are now on sale.

Shortland Street – the Musical promises to be a ‘fast-paced comedic romp filled with song, scandal, intrigue, love, muffins, and plenty of cliffhangers’.

The musical is based on the first three episodes of the long-running series, way back in 1992, but it comes with a warning that it is ‘not your Mother’s Shortland Street’.

“It’s been a real privilege to be working with such a community of talented cast and crew.

There’s been a huge number of hours taken to bring this kiwi classic to the stage.”

The question on everyone’s lips, of course, is will they get to hear that famous line?

“Perhaps”, says Brigitte, “but not as you know it!”

So you’ll just have to get your tickets to find out.

The company is indebted to all sponsors, including major sponsor The Gate. General Manager Glen Christiansen says, “We are delighted to sponsor this community group.”

A capacity crowd managed a sneak peek with their morning coffee at Forage Cafe last Sunday.

The cast introduced themselves and performed a few of the songs from the musical, while customers were served by staff dressed suitably in hospital scrubs.

The venue for the show is Cromwell College Auditorium, on 16-24 July.  Tickets available online www.fttc.co.nz