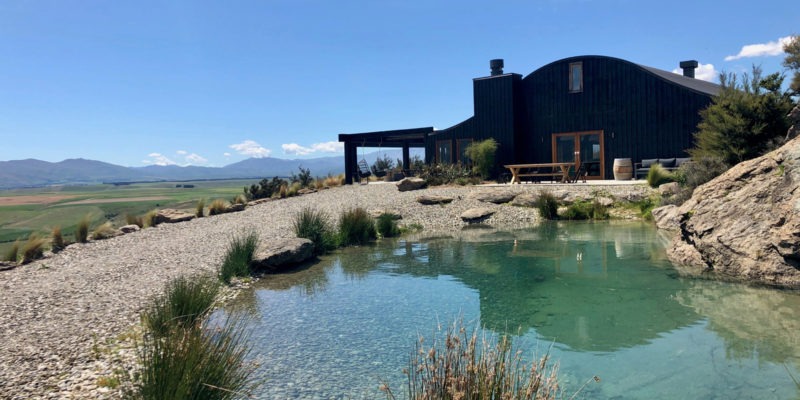 The Canyon owner Hayden Johnston is delighted that the beautiful Tarras site was selected by Tourism New Zealand to feature in its new campaign across Australia, called ‘Stop Dreaming about New Zealand and Go’.

The exposure is priceless for the vineyard, and for Central Otago.

Hayden was approached by a location scout, looking for a place to base the video.

The Canyon made the shortlist, and eventually was selected.

Tourism New Zealand had planned to launch the campaign in June or July, but quickly advanced this when we joined the travel bubble.

A very complex scene, in which the restaurant was filled with many versions of the same actor, meant that a cast and crew of approximately 50 people descended on the vineyard.

Hayden says that a lot of thought and planning and a high level of professionalism went into the production, by the Auckland office of international production company Finch Co.

The campaign has already gone live in Australia and can be viewed on YouTube under Tourism New Zealand.

However, the vineyard’s name and location are not given, although it is placed front and centre of the ads.

“The challenge for me now is to connect the dots,” says Hayden, aiming to scaffold off this great promotional opportunity for The Canyon and our area.

Hayden established the Tarras Vineyard in 2002 and has since developed another vineyard, Kuru Kuru Wines.

Then, in 2016, he visited ‘The Nose’ restaurant in Cromwell, as they had been interested in buying his wines.

He discovered that the amazing, sculptural building was destined to be destroyed, and he began to imagine the stunning event space overlooking his vineyards and the dramatic schist rock canyon with breathtaking views.

He was hooked ‘before finishing the coffee’.

The COVID restrictions of 2020 gave the restaurant a wonderful window of opportunity, when some of New Zealand’s great chefs were suddenly available to work, and Hayden gained a great following for his casual fine dining occasions.

The Canyon is currently closed for winter and plans to reopen to the public in the spring, with wines and gourmet platters.

It is available all year for weddings, business conferences and other events.

One such event, just announced, will be the WoolOn wool design and artistry three-day occasion in August this year.

The expo will be shared between Alexandra’s Central Stories Museum and Art Gallery and The Canyon, as well as having a virtual platform.

Hayden believes the two venues will offer the best of both worlds, in the heart of merino country, and is excited to be a part of WoolOn 2021.