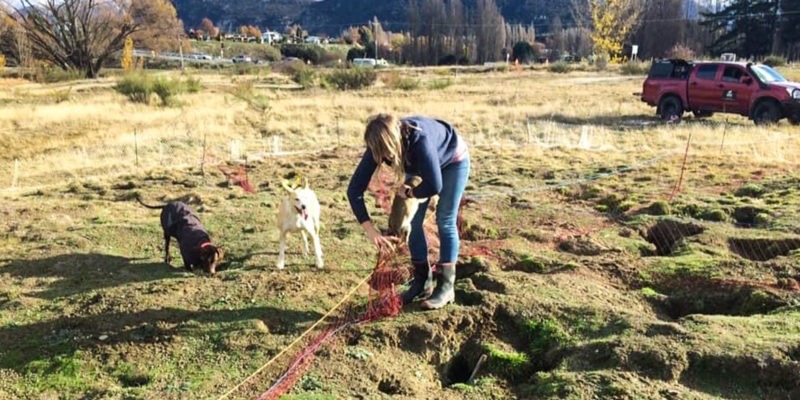 Charlotte grew up on a farm in Hawea Flat and comes from a background of pest controllers.

“My grandad was a deer culler, and my dad was on the rabbit board.  So, pest control is in my blood,” she says.

Charlotte moved to the Wairarapa for a while but decided to return to the Wanaka area. Before starting her business, she was dry stock farming in Tarras, but was made redundant due to a combination of bovid and covid.

She decided to get into rabbit control after viewing videos about ferreting in the United Kingdom.

She thought it was really different and was keen to give it a go.

She believed that a different method of catching rabbits would be useful in areas where you can’t use poison or shoot a rifle.

In fact, ferrets were introduced into New Zealand in the 1880s for the purpose of controlling rabbit numbers.

“When I started rabbiting, I only knew of one other person who did ferreting, now there are four of us in the Wanaka area,” says Charlotte.

The upside of her work is being able to work with animals and hearing great feedback about people no longer having a rabbit problem.

The downside is definitely weather – ferrets don’t like high winds or rain, so ferreting can be very tricky in the winter months.

Of course, this time of the year is an efficient time for rabbit control, as it will very shortly be peak breeding season.

A single female rabbit can have 45 offspring in a year, producing a litter of four or five kittens every six weeks.

Rabbits can breed at five months of age, so a female born in early spring will produce young within the same breeding season. Rabbit populations commonly increase eight- to ten-fold in one season.

“People are always shocked when I turn up to their house and I’m a girl but a lot of the time they think it’s really cool to see a girl doing this line of work,” says Charlotte, adding, “and I haven’t had any complaints as to my work ethic.”

She gets very fond of her ferrets, saying, “A lot of people consider them a tool, but I look at them like they are my babies. They all have names and I know who is who, they also have different personalities like dogs.”

Charlotte is happy doing her work anywhere from within town boundaries to large stations.  She arrives with perhaps seven dogs, net fences, two experienced ferrets and two young trainee ferrets, and it is fascinating to watch them take up their various roles.

So, if driving down your lane at night reminds you of Watership Down, Charlotte can be contacted on upperclutharabbitcontrol@gmail.com. You’ll want to cuddle her ferrets for their good work, as she does – or perhaps not?