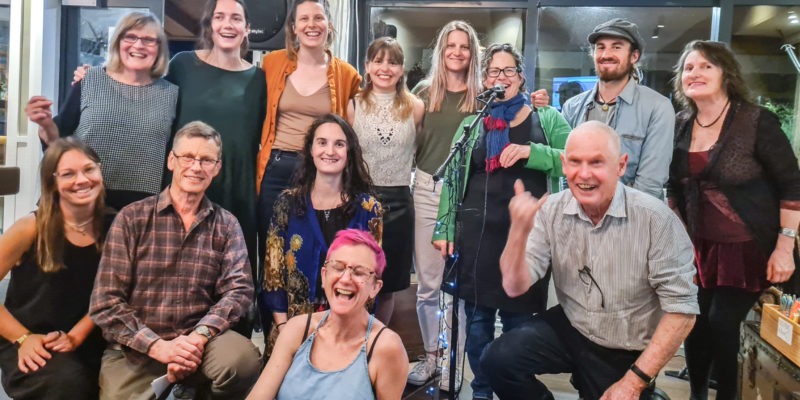 It is that time again – calling all poets!

The Bannockburn Arts Festival, ‘Across the Bridge’, will celebrate its tenth anniversary In September-October this year, with an extended programme and two chances to show your prowess with words.

Last year the Poetry Slam was a very popular addition to the festival.

According to Wikipedia, ‘a Poetry Slam is a competition arts event in which poets perform spoken word poetry before a live audience and a panel of judges’.

Participation takes courage and performance skills – but mostly courage – and the audience gives great support and encouragement. Poets progress through three rounds on the night, with a different poem in each round.

New Zealand Poetry Slam runs the annual, national performance poetry competition that takes place across Aotearoa, and it will accept the winner of the Bannockburn Slam as a regional finalist for the national competition.

This person will be given some financial assistance to travel to the national finals.

Last year there were three play-offs (in Queenstown, Wanaka and Cromwell) where the progression of poets was whittled down to nine performers, and from there the regional finalist was chosen.

This year it will all happen at one event, in the Coronation Hall, Bannockburn.  The judges are all members of the audience, chosen randomly on the night, amongst loud support from the audience. The audience rules at a Slam.

The festival has also run a written poetry competition for several years, with categories for school students and for adults.

The winners receive monetary prizes of $200 for the adult category and $100 for the student.  In addition, the two winning poets will be published in a local paper.

The adult section can be on any topic, the student section must go with the theme.

Poems could have been previously published but cannot be re-entered from previous year’s submissions to the festival.

So, use these winter nights by the fire to get your creativity going.  There is no need to enter for the Slam – just turn up early on the night of Tuesday, 28th September, as if too many poets arrive, it will be first-come-first-served. Details of the written poetry competition will be sent to all Central Otago schools, and may be emailed to individuals by request from jan@sequoiafinewares.co.nz