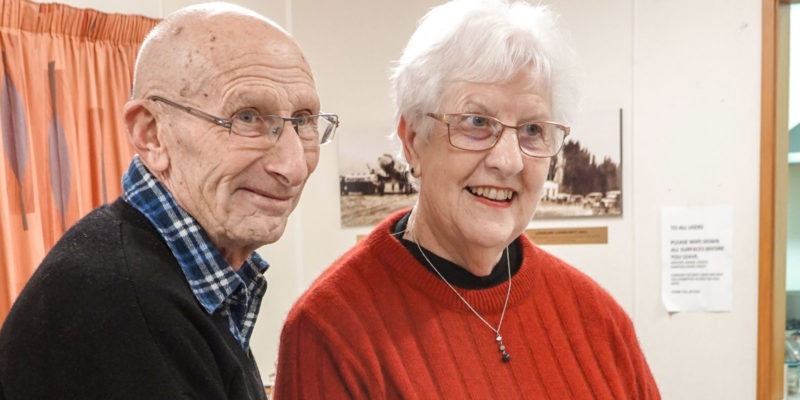 Strangely, to celebrate with the Bannockburn Indoor Bowling Club on the occasion of their 60th Anniversary, you need to go to Lowburn.

It was there that the club gathered past and present members for a celebratory cake and cuppa, and a few tales of the club’s history.

The cake was cut by life members Gloria and Kevin Hurley. Past members Freda Foster and Yvonne Todd were there to reminisce also.

Then, of course, it was time for some serious but social rounds of club pairs.

The club is so named because it was formed in Bannockburn in 1961, and minutes from that year, read by current Secretary/Treasurer Janeen Wood, hold memories of members seeking to purchase a kerosene heater, and subs being $5 per annum.

They are only $20 per annum now, so that represents good value.

In 2011, when Coronation Hall, Bannockburn was deemed an earthquake risk, the club moved to the Lowburn Hall, and has remained there, though Coronation Hall has now been renovated.

The club’s silverware shows an interesting history. Gloria and Kevin Hurley have dominated the Championship Pairs for many years.

Gloria says that she played indoor bowls for a year in Dunedin, where her husband was also a member, but left it for many years before joining the Bannockburn Club in 1980.

Gloria has dominated the Ladies Championship singles over the years.

Close viewing shows that the Turner Cup was won in 1976 by brothers Dave and Maurice Turner, which seems fitting.

The 1970 Men’s singles winner was L. Rosie, but the earliest winner’s engraving was on the John Anderson Memorial Cup, in 1961, going to A R Henderson.

With an emphasis on friendship and fun, club membership is growing and looking forward to the future.