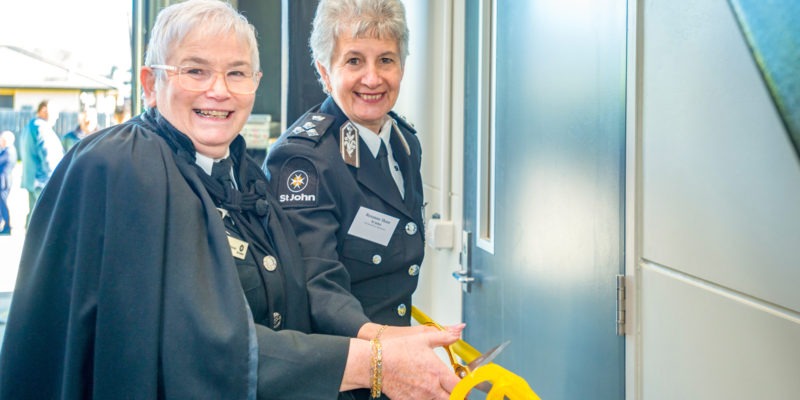 It was a grand occasion when the new St John’s building was officially opened last Thursday.

A large crowd joined the celebrations and were warmly welcomed by MC Kerry Mitchell.

Craig Stockdale, General Manager, Community Engagement South, expressed gratitude to the Cromwell community, the volunteers and paid staff, saying, “These people make up the beating heart of St John’s, and in this room today the aroha is beating loud.”

In memory of the journey to this point, each person attending the celebrations was gifted a small woven bag, signifying the community woven together.

It contained a schist rock for creativity and the environment, tiny driftwood from Lake Dunstan, a river stone for history, and paua, traditionally signifying the eyes, the stars, and the gaze of the ancestors.

Chair of the Project Governance Group of St John Cromwell, Robert Miller, spoke of the new facility futureproofing the ambulance service for the region.

“The building received absolutely no government funding or support,” Robert says, adding, “It was built on community spirit.”

The Station is a very special building, built to withstand a seismic event of magnitude 8.

As such it is ready to act as an organisational and assembly point for Cromwell and Central Lakes.

The facility will not only be an ambulance station but will be an asset for the community for many years to come, offering community first aid, youth education, therapy pets and health shuttle services.

In the final task of this official process, the Reverend Robyn McPhail, Chaplain, dedicated the building, and gave thanks for the work of many hands to create it. She concluded with a blessing, and the crowd moved to the official photographs and kai.