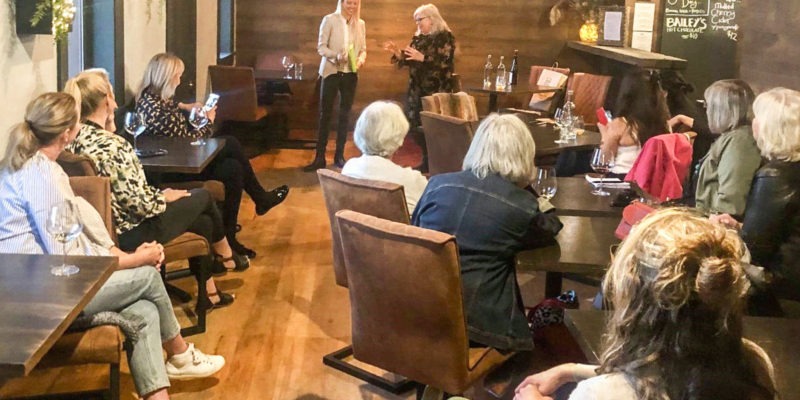 In March this year, Cromwell and Districts News reported that Sophie Parker-Thompson, who grew up in Cromwell, became the South Island’s first ever Master of Wine.

Last week she was back in Cromwell, and guest speaker at a Women in Wine Central Otago NZ event at The Office Restaurant and Bar.

Introduced by Kerry Stanton-Herbert, of Stewart Town Vineyard, Sophie spoke of her journey from completing her secondary school here, to a law degree at the University of Otago. Before she had completed the degree, she had already decided that her career was in the wine industry. However, Sophie acknowledges that she uses the skills she learned in studying law on a daily basis, and they were particularly useful in completing her Master of Wine.

This title is considered as the most precious wine certification one can attain, with the blind tasting examination notoriously averaging a 10% pass rate.

In preparation, Sophie and her husband Matt Thompson took turns in testing each other over a nightly bottle of wine, and the habit still sticks.

Based in Marlborough, the couple own and operate their premium, small-batch winery venture, Blank Canvas Wines, together with a wine industry consultancy Lock, Stock and Barrel Consultancy.

The final part of a Master of Wine is to research and write a 10,000-word paper on a topic of choice that will ultimately benefit the wine industry, and Sophie’s topic was, ‘What is the Relationship Between the Use of Sulphur Dioxide and Biogenic Amine Levels in Wine?’.

She explains that this is aimed at reducing the adverse effects that some people experience from wine consumption, saying, “It’s about the hang-over you get when you don’t deserve a hang-over.”

The day after this event, Sophie was out at Coronation Hall, Bannockburn, again sharing her knowledge. She was a guest of Central Otago Winegrowers “Winegrowers Toolbox” session in the morning, after which she presented her research findings to the local industry.