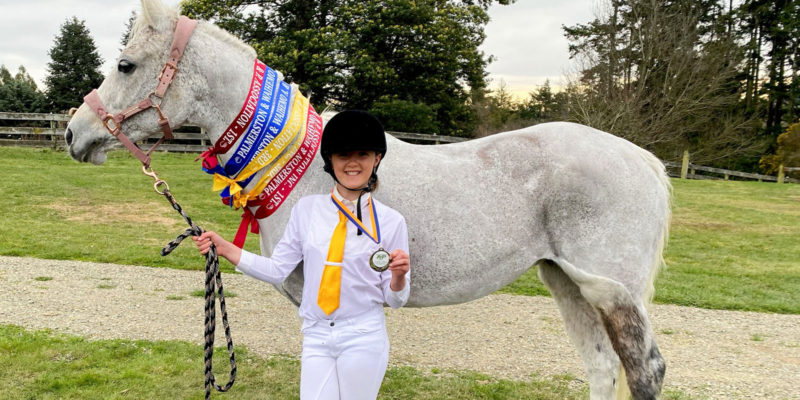 Being given the opportunity to join the Dunstan High School composite team in the Interschools Equestrian Event in Oamaru recently was a steep learning curve for 11-year old Lily Faulkner and her mother, Jenna.

Lily has only been riding for a year, and her first competitive event was in November 2020. She travelled to the Palmerston Showgrounds on Sunday 19 September to join the Dunstan High School team.

Dunstan High School did have two teams entered into the competition, but, due to Covid the dates were moved back, resulting in four of the riders being unavailable, so one composite team was sent.

The competition involved 6 teams of Year 7 to 13 students from all over Otago, and Lily was delighted when the team earned the title of Overall Top School.

Lily herself, on her pony Southwind Summer Rose (‘Summer”) gained a first in class dressage and third in the 70cm jumping event. The team was placed third in turn out, second in the show jumping, second in dressage, second in fancy dress and topped Otago in the competition.

The team manager, Shelley Sanders, of Alexandra, says, “A great weekend was had by all! Sports under Covid restrictions have made competitions challenging, and we thank those who put in the hours to keep these events running whilst social distancing.

Lily says, “It was muddy and a bit slippery, but I really enjoyed being part of the team.”

Mum Jenna says, “It was such a supportive team of riders who walked away with the title, though it was a real learning curve for us, even learning how to clip… who knew that making a horse look pretty takes days!”