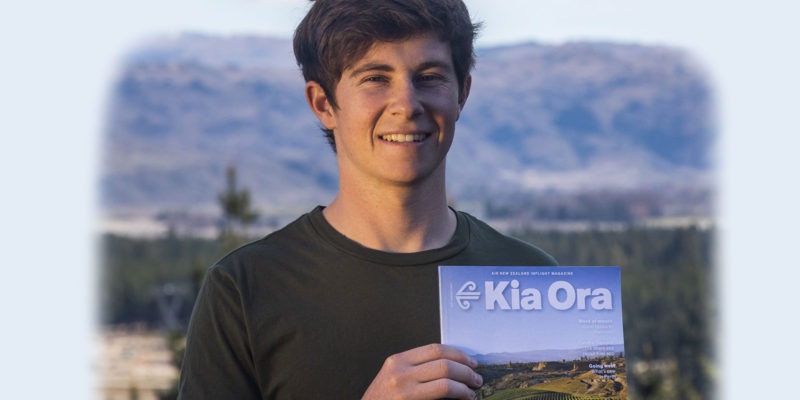 Tourism Central Otago’s visual content creator, Will Nelson, has achieved the honour of having one of his images chosen as the front cover for the September issue of Kia Ora, Air New Zealand’s inflight magazine released today.

Many photographers strive to have their image selected as a cover shot, but few achieve it – and even less so at the age of 20 which Will is.

Will is known to many in the Central Otago region having grown up in the district. He is a keen outdoors man, getting up into the hills on his mountain bike, or on the rivers in his kayak.

This passion for the outdoors has also been captured by Will through the lens.

At the end of 2020 Will joined Tourism Central Otago in a newly created role focussing on building more visual content that celebrates the beauty of Central Otago and encourages visitors to come.

Tourism Central Otago General Manager Dylan Rushbrook said the team was “absolutely stoked to see Central on the cover”. “We believe it’s a first for our district and for it to be one of Will’s shots is just incredible.

For such a young man, he has an incredible skill and eye for capturing what make this place special. When I first met Will last year, during his interview for the role, the thing that got me was how he kept referring to videography and photography as his ‘craft’.

He really is dedicated to developing his skills and I think we’ve all seen his growth in this last year, and he has taught our whole team a thing or two, or three!

He is incredibly talented and driven, and along with his local knowledge of all the great spots, we’re really very lucky to have him on the team.”

Will is studying a Bachelor of Creative Media Production in Wellington full-time, but during his breaks returns to Central Otago to capture stunning content.

I’m getting real world experience while studying. The biggest benefit is I get to apply my learnings immediately to my work and I can already see the progress I’ve made in the past 12 months,” said Will.

Unfortunately Air New Zealand isn’t supplying Kia Ora to those essential workers right now due to COVID restrictions. They are instead posting copies out to their Gold and Gold Elite members.

“That is almost a better result for Central Otago,” said Dylan. “Though we won’t reach the larger passenger audience, we will be delivered to the households of Air New Zealand’s premium customers, the exact audience we’re keen to attract down here for their next holiday.”