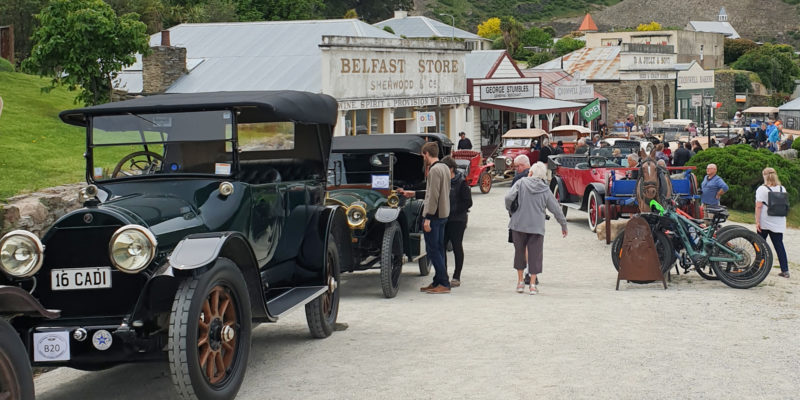 The Central Otago Vintage Car Club hosted the National Veteran Rally last weekend with automobiles and motorcycles from 1900 – 1918 on show as they covered terrain across the region.

Rally Director John Martin along with a team of six helpful folk pulled the rally together welcoming guests from across the country, excluding those unfortunately in higher alert level regions. “Some enthusiasts are based in higher alert regions which meant we had to continue on without them. Five motorcycles and 36 vehicles made up the tour which was thoroughly enjoyed by everyone,” John says.

A meet and greet on Friday before a jaunt through to Tarras for lunch at the Marsh’s residence was enough for some in very old modes of transportation, while others continued onto Luggate before following the west side of the lake back to home base.

The more adventurous took a detour via Cardrona enjoying every moment of the Central Otago sunshine.

Sunday saw the group enjoy time at Highlands taking part in a field test and driving skills before treating locals to an opportunity to take a look at Old Cromwell, coinciding with the Sunday Markets.

“I was really impressed with the interest from Cromwell locals, it was great to see them mingling with drivers and enjoying the line-up of vintage cars,’ John adds.

John himself spent the weekend on a 1913 Royal Enfield motorcycle, a motorcycle which took seven years to restore, but worth every moment.

Cromwell Community chairperson Anna Harrison waved the vintage car enthusiasts off from the Central Otago Vintage Car Clubrooms on Litany Street as they began their tour on Saturday.

“The event was lovely, everyone looked fabulous in their vintage costumes, and it was a privilege to wave them off as they hit the road,” Anna says.

John, on behalf of the Central Otago Vintage Car Club wishes to thank all those who have helped make the event such a great weekend, and although it is the North Island’s turn to host next year, plans are still up in the air regarding the 2022 National Veteran’s Rally.