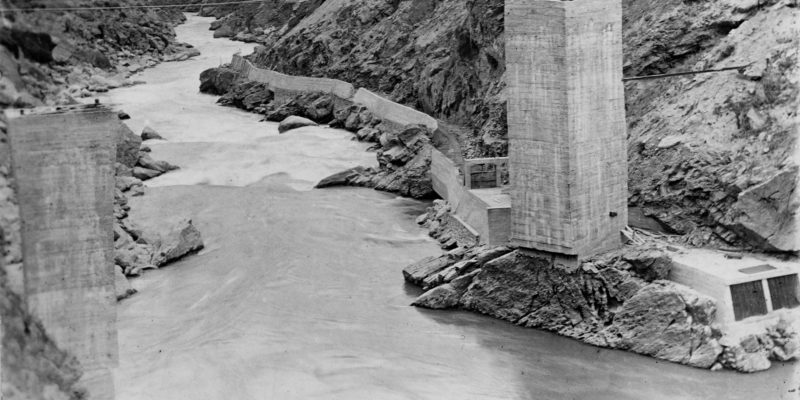 As mentioned in an earlier article the early settlers diverted water from the many streams flowing down from the mountains on either side of the valley initially for mining, now attention was turned to farming.  As a source of water, they looked to the Clutha and Kawarau rivers.  The challenge was to lift the water from these rivers up to the land. Various types of pumps had been used in other countries for many years, all required an energy source to drive them.

In the Kawarau below the current Mining Centre there was a section of the river known as the Kawarau Rapid where the river level dropped.

Several groups were considering schemes in this area. They all had a similar idea; dam the river just above the rapids, raise the river level and divert water via a channel to a pump house.

Some water would drive a turbine which coupled to a pump, the pumped water was to be taken across the river in a pipe known as a rising main to a holding dam. From here via open water races to irrigate the land between the mouth of the Kawarau Gorge to Cromwell and as far as Lowburn.

There was a lot of friction between the groups.  Percy Sargood, a wealthy Merchant and Philanthropist from Dunedin, appointed himself chairperson of one of the groups. He financed the project and chose the design.  This design was not suitable for this part of the river and was plagued with problems from the beginning. This design was to build two vertical concrete pillars, one on each side of the river. Then topple them into the river to form a dam and raise the level by 5 meters and divert some of the river flow into a channel to a pump house.

Every thing was built. The first pillar fell on cue however was moved from the intended position by the current of the river. The second one failed to fall. A successful attempt was made several days later. It too was taken out of position by the current.  The river level failed to rise anywhere near the intended amount.  After much argument between the groups a truce was reached, a compromise was met and modifications were made and it delivered some water, no where near the intended volume.