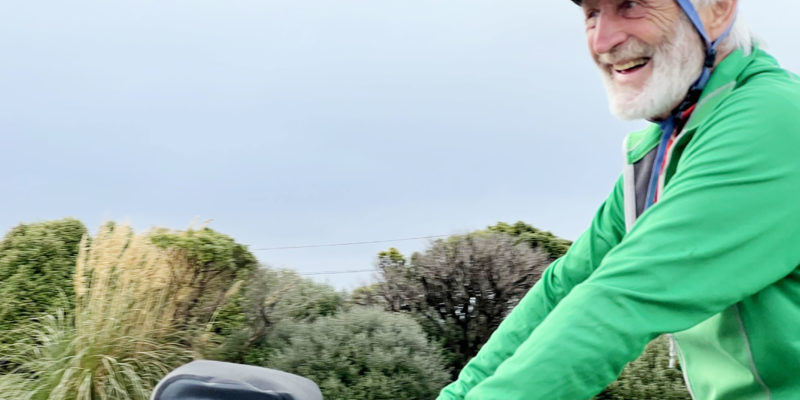 Is it me?  Something I say or do?  Am I just hard to live with? Husband Tim is on his bike again – this time from Bluff to Picton on the Tour Aotearoa cycle route.

This is a the first half of 3000km route created by the Kenneth Brothers, exploring the length of New Zealand, ‘on wonderfully remote and scenic, quiet gravelled and sealed roads, cycle trails and an 84km beach section’. Tim bought the brothers’ official guide, in two parts covering each island, for $20, but he promises he’ll stop at Picton for this part of the journey.

He plans that I will travel with him for the North Island section later in the year – by what mode and in what capacity I am unsure.

So I deposited him on a drizzly day in Bluff last Saturday, and sometime this week we, a small contingent of friends from Bannockburn, plan to meet him in Wanaka and ride with him to Hawea, no doubt stopping at Albertown for a coffee and french pastry from his favourite bakery.  Unlike Tim, most of us will be on electric bikes – he will be on his trusty yellow bike.

As many readers will know, Tim is not stranger to wondering off on high energy adventures.  Four years ago he had just returned from 11 months cycling over 11,000ks through South America, stopping when he ran out of land in Tiera Del Fuego.  He was home a little late to celebrate his 70th birthday.

This time last year, he had just completed the Aotearoa Track, walking the length of New Zealand.

I am most commonly ask ‘Why?’, ‘Who is it raising money for?’, and ‘Who is he travelling with?’.  He travels alone and doesn’t raise money – if asked the ‘Why?’ question he is most likely to say ‘Out of curiosity’.

I believe the Tour Aotearoa adventure may be a recce for a longer, more ambitious route in another part of the world, but I am not keen at this point to know details! I’ll perhaps let you now when he gets to Picton.