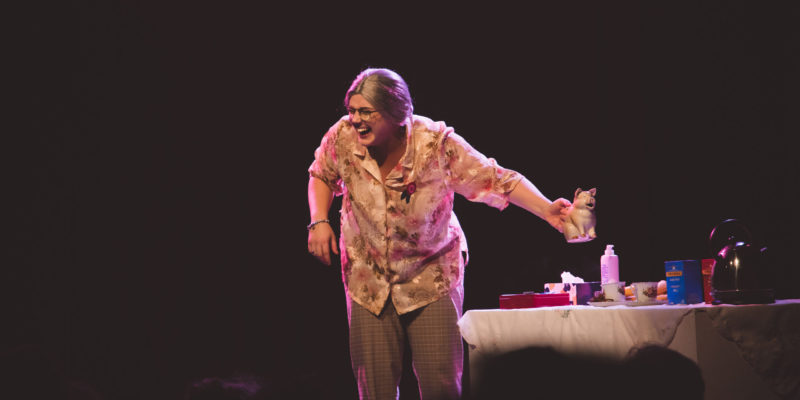 The comedy, Pat Goldsack’s Swingers Club and Brothel, is scheduled for Coronation Hall, Bannockburn on 25 June.

This comedy has been reviewed as ‘a pure joy to watch’ (Art Murmurs; ‘impossible not to love’ (Echoes from the Wings) and ‘utterly phenomenal … hilarious (Theatreview).

It is a one-woman show, written and presented by Kate Boyle.  Kate is one of New Zealand’s most noted Shakespearean Actors, with 13 Elizabethan productions performed over the last eight years.

She is directed by award-winning comedian Alexander Sparrow, as seen on TVNZ’s Breakfast, TV3’s The Project and Prime’s Back Benches.

The play tells the story of 87-year-old Patricia Goldsack, known to her friends and lovers as Pat.  She has toured New Zealand for the last sic decades with her touring swingers club and brothel.  She is keen on making a dollar for her old age, and meeting lots of new and naked friends, so she explores how close two degrees really is, and whether we can make that separation even smaller.

The show features anecdotes from Pat’s chequered past, audience interaction, and all kinds of tips and tricks, delivered with a sharp grandmotherly wit and accomplished improvisational skills.

Fresh from multi-award nominated performances, this is one old woman you don’t want to miss.

Brought here by Arts on Tour NZ and ArtsCentral, the production is suitable for Mature Audiences only.