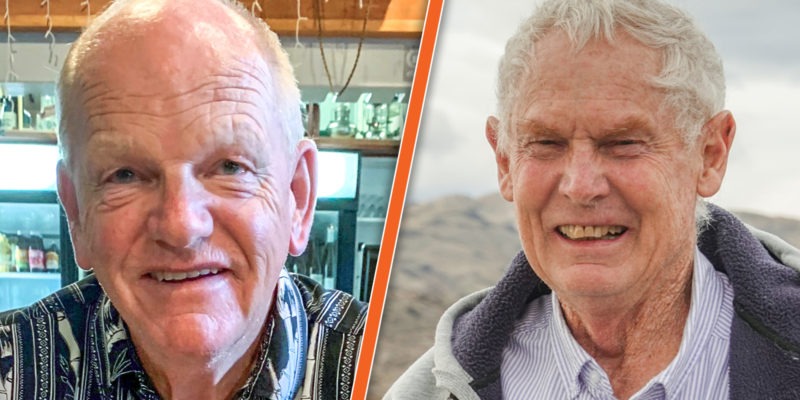 Nominations have been received from David George and Bob Scott for the election to fill the extraordinary vacancy on the Cromwell Community Board (CCB), from the resignation of Robin Dicey.

The election will be conducted by postal voting using the First Past the Post electoral system to determine the successful candidate.

Voting will open on Thursday, 1 July and close at 12 noon on Friday 23 July.

Get to know Bob Scott

When Bob Scott and his wife came to New Zealand from the United Kingdom in 2004, they settled in the North Island, near Warkworth.

However, over several visits to Central Otago, the couple fell in love with the Cromwell area.  This led to them move to Lowburn in 2015.

They have recently bought a house in The Dunes, ‘close to the 9th tee’.

They have less land, but a view right down the green to the mountains, and Bob does not have to mow it.

Bob had his own business as a kitchen designer in England, and worked for The Kitchen Studio in New Zealand.

He worked part-time at Mitre 10 Cromwell before retiring.

A ‘mad keen golfer’ the first thing he did when arriving in Cromwell was to join the golf club.

He spent two years as Men’s Club Captain, and is currently the Vice President.

Recreationally, Bob is keen on the performing arts, and all art, drama and music concerts, and says,

“It’s such a shame that there is not a suitable venue, because you can’t beat live performance actually.”

Bob tells the story that, within weeks of moving to the Cromwell area, he invited a friend to a chamber music concert.

“I was embarrassed, actually, because the hall was in such a state, with drapes hanging off the wall, torn blinds and bad seating.”

Not afraid of controversy, Bob believes, that the Cromwell Community Board is in need of new members, saying of long-term members,

“If they haven’t achieved, they should stand aside and let others take over.”

“I don’t know Robin.  He was regarded as a hard worker and he wasn’t able to achieve.”

First priorities for Bob on the Board would be the hall and the mall.  He says,

“The thing that strikes you when you first come to Cromwell is what a mess the mall is.”

Ideally, the CCB would focus on both, simultaneously, but that is probably unlikely because of the budget restraints.

His plan therefore would be,

“Hand over the main responsibility for the community centre to the trust, obviously with guidance from the council, and let the CCB concentrate on the problems with the mall.”

Parking is an issue, and should be part of the revamp, but, in the short term, Bob believes that improvements can be made by proper enforcement of the parking time restrictions.

This is particularly true for the 2-hour areas in Murray Terrace and the large area in front of Paper Plus, where people park all day, often car-sharing to travel to Queenstown.

Bob has been observing the parking habits and believes that a re-think would solve much of the current problems.

“The town has to move forward.  It’s been forced into it by its own popularity, with such wonderful recreational facilities, the cycle tracks and wineries.”

Get to know David George

He and his siblings ‘grew up with ink on the fingers’, as his parents ran the Central Otago News.

Starting life in Ripponvale, he moved to Lowburn when he was three years old.

His schooling took place in Cromwell District High until Form 6 and 7, when he had to move to Dunstan High School, as Cromwell classes stopped at Form 5.

Even then David was involved in local body politics, starting a School Council at Dunstan High School, with the agenda to abolish the wearing of school caps.  His first mission was successful.

In 1976 he took over the family property in Lowburn, managing the orchard, and supplementing that with work on ‘about every orchard in the district’.

He is married to wife Anne, has three children and now has grandchildren living in the area.

David’s motivation for the candidacy is, as always, to move things for his community, with a ‘getting things done’ mentality.  This time, he wants the opportunity to oversee the re-building of the museum, and the best possible community centre.

He mentions Fleur Sullivan as being a role model of community action  – redeveloping Clyde and pioneering the cavalcade.

“I think we have to wake up and realise that we are changing.  We have enterprising people living in our community – people like Jessie Sutherland.  She grew up here, went to Cromwell College and is now an architect with vision.  She should be given her chance to shine.  We are in the planning stages of a new era for Cromwell, and we can do something distinctive.”

Unusually, David is transparent that he plans to spend only this part-term on the CCB, and then move to the Central Otago Council.  He would like to train someone to take his place on the CCB, but not till he learns the rope, saying,

“I’ll be in the learners’ lane basically.”