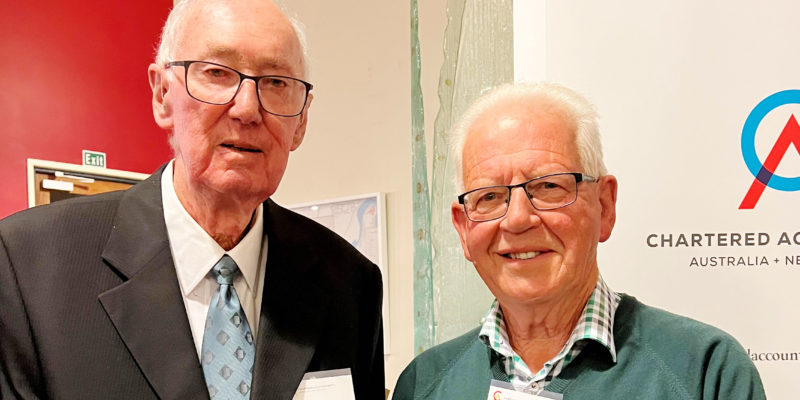 Chartered Accountants Australia and New Zealand (CA ANZ) honoured three of the region’s long-serving members at a gala night held at Carrick Winery on 13 May.

Members Bill Dunbar and Ken Cook received Members Awards for 60 years of service, and Peter Mead for 50 years. Bill was not able to attend the event.

Ken began his career in Invercargill, then moved to Alexandra about 40 years ago.  He has been away from the firm, now known as Ibbotson Cooney Ltd, for 15 years now, but he remains a very handy contact for friends and family.

Peter Mead started his accountancy studies on a part-time basis at Otago University, when employed with the Public Trust Office in Dunedin.  He then secured a position with Cowan & Morton, and came to their Cromwell office in 1971.  In 1976, Peter joined in partnership with Alastair Stark to establish Mead Stark Chartered Accountants, retiring in 2009.

In 1993, Peter was conferred as a Fellow of the professional body for outstanding career achievements and contributions to both the profession and his local community.

At this year’s Gala, Members Awards were also presented to those who had reached 25-year and 40-year career milestones.  New graduates received their membership certificates, and two members, Paul William Moodie and George Richard Collier were presented with Fellowship Awards.

Ken Cook says, “The Members Award is in recognition of a long career of service and it is an honour.”

By way of a remarkable coincidence, but one which Peter was absolutely delighted and honoured with, he was presented with his 50-year membership certificate by CAANZ branch member Rachael Prendergast, whom Peter employed as his firm’s first graduate accountant in 1998.